This is a compilation of some of the most memorable and interesting Casino Royale quotes.

Watching Casino Royale with Daniel Craig, Eva Green and Judy Dench are definitely a treat especially if you enjoy the non stop action. Just like all 007 movies,  you get great action sequences. But what’s being missed out by casual movie goers is the witty dialogue between the lead stars.

James Bond is all brawn and muscle, but you can get a close look at how his brain works with the way he talks. You can compare the two Casino Royale movies (the one from the 60s starring Peter Niven and the 2006 version) and realize that the writing in this rebooted edition is top-notch. Below are the Casino Royale quotes that show the writer’s exceptional knack for dialogue:

Here’s Bond with his dirty sense of humor:

Vesper: I can’t resist waking you. Every time I do, you look at me as if you hadn’t seen me in years. Makes me feel reborn.
Bond: If you had just been born wouldn’t you be naked?
—

Vesper: It doesn’t bother you; killing all those people?
Bond: Well I wouldn’t be very good at my job if it did.
—

Bond: I’ve got a little itch, down there. Would you mind?

Vesper: Now, having just met you, I wouldn’t go as far as calling you a cold-hearted bastard…
Bond: No, of course not.
Vesper: But it wouldn’t be a stretch to imagine. You think of women as disposable pleasures, rather than meaningful pursuits. So as charming as you are, Mr. Bond, I will be keeping my eye on our government’s money – and off your perfectly-formed arse.
Bond: You noticed?
Vesper: Even accountants have imagination. How was your lamb?
Bond: Skewered! One sympathizes.

Vesper: Am I going to have a problem with you, Mr. Bond?
Bond: No, don’t worry, you’re not my type.
Vesper: Smart?
Bond: Single.

—
Vesper: There isn’t enough room for me and your ego.

Here’s Bond on being an MI6 operative:

Vesper: It doesn’t bother you? Killing all those people?
Bond: Well I wouldn’t be very good at my job if it did.

Bond: So you want me to be half-monk, half-hitman.
M: Any thug can kill. I need you to take your ego out of the equation.

Vesper: You love me?
Bond: Enough to travel the world with you until one of us has to take an honest job… which I think is going to have to be you, because I have no idea what an honest job is.

And finally, here’s how James Bond taunts the villains: 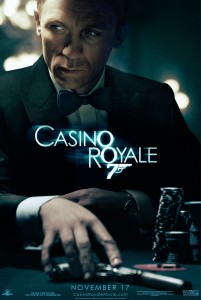 Le Chiffre: You’ve changed your shirt, Mr Bond. I do hope our little game isn’t causing you to perspire?
Bond: A little. But I won’t consider myself to be in trouble until I start weeping blood.

Bond is tortured by Le Chiffre using a rope with a weight tied to the end and whips it at Bond’s testicles. Bond responds to torture by saying:

Bond: Now the whole world will know that you died scratching my balls!

There you have it, ladies and gents. The above Casino Royale quotes are the perfect example of why this movie is such a gem. It’s a thrill of a ride, but a thoughtful piece as well, with all the wit and insightful dialogue.